It is now almost predominantly treated by interventional radiologists (2). The presentation will concentrate on tips and tricks for the procedure, and how to avoid pitfalls and manage any complications.

Notwithstanding the difficulty of making the diagnosis clinically and radiologically, outcomes are also difficult to assess (and often anecdotal), and there remains a lack of level 1 evidence to robustly assess clinical efficacy (3).

Clinical evaluation of the vulval and paravulval areas in association with a symptomatic history is inadequate to make the diagnosis. CT and MR scanning are unreliable; transabdominal, transvaginal and transperineal ultrasound variably available for this indication and subjective, whilst catheter venography (Fig. 1) although invasive, seems to be the most objective (3).

The transjugular venous approach not only offers reliable access, since it is highly visible and easy to access under ultrasound guidance, but also offers an ‘antegrade’ approach to the ovarian veins including aberrant retroperitoneal branches (Fig. 2). This technique reduces the requirement to re-form ‘reverse curve’ angiographic catheters where there is less control particularly of embolic agents, as pushing a catheter from the groin cranially makes deployment ‘over the curve’ inherently unstable.

Initially, a non-thrombotic iliac vein lesion or an acquired main pelvic venous stenosis should be excluded as the cause for enlarged ovarian veins as an auto-bypass (4).    It is then recommended that the left ovarian is initially evaluated and treated via the left renal vein prior to assessing and treating its counterpart which typically drains directly into the inferior vena cava.

Consideration should be given to treating the most distal (and typically smallest) branches with sclerotherapy using foam prior to embolising main ovarian truncal veins.  This can be achieved by introducing an agent directly into the vein lumen to cause endothelial damage, endoluminal fibrosis and ultimately vein closure.  In contrast to liquid sclerosants, which are diluted by blood, reducing concentration to the vein wall, foam displaces the blood allowing direct and relatively prolonged contact with the endothelium.

Foam is created using the Tessari method (5) utilising a tensioactive injurious agent such as sodium tetradecyl sulphate or polidocanol, mixed with a 50/50 mixture of carbon dioxide (CO2) and oxygen (O2), to generate microfoam with bubbles  < 250 microns (3).

This gaseous mixture offers an extremely low risk of embolic phenomena compared to room air which contains approximately 80% of relatively insoluble nitrogen (N2). Furthermore, CO2 is fifty times more diffusible than N2 through the capillary vein wall. Although CO2 alone makes the foam less robust, adding O2 (which has a lower diffusibility) stabilises it (6). It is notable that in contrast to nitrogen, given the rapid solubility of oxygen and carbon dioxide, any ‘free gas’ in the blood is simply breathed out by the patient.

Some operators advocate the use of balloon occlusion catheters to prevent reflux of foam, but with the above gaseous mixture administered during the Valsalva manoeuvre in the Trendelenburg position, they are unnecessary.

The recommended technique is to initially fill the target main venous trunk and distal veins with (positive) iodinated contrast, and under fluoroscopic screening, displace the contrast with (negative) foam until it just reaches the most terminal branches as an end-point.

The largest truncal veins inevitably show some spasm having been exposed to sclerosant and will readily contract and occlude following sequential placement of embolization coils within these main dilated veins. Pushable coils usually suffice although a detachable embolic may be desirable for the most proximal coil in each main ovarian vein.  Only 2-4 of these long preferably fibred coils are usually required and although anecdotal, it is strongly recommended that the entire length of the refluxing vein trunk is covered (Fig. 3) to prevent new collateralisation because there are often tiny communications between the main trunk and retroperitoneal veins (7).

Although rare and probably overstated, the ‘abdominal ‘nutcracker phenomenon should be excluded but it remains controversial as to whether the left renal vein should be treated given concerns about stent migration (8).

Complications are unusual and related to venous puncture such as iatrogenic pneumothorax and inadvertent carotid puncture for the transjugular approach. Misplacement or displacement and vein wall perforation are well-recognised complications of coils but are usually easily managed using endovascular or conservative approaches respectively. 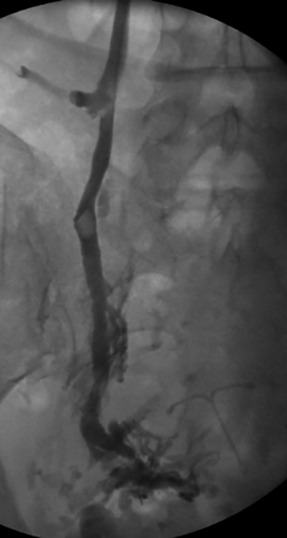 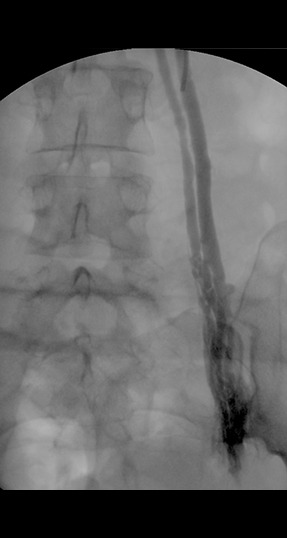 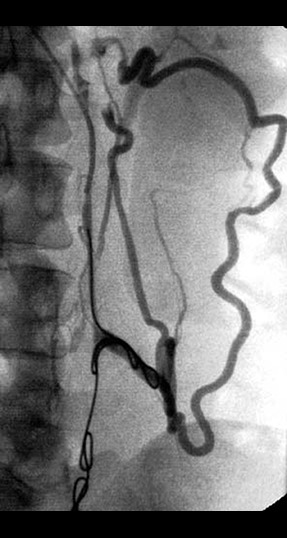 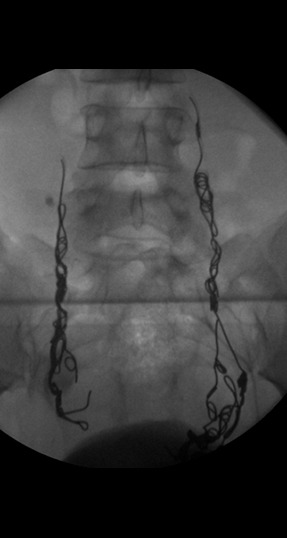 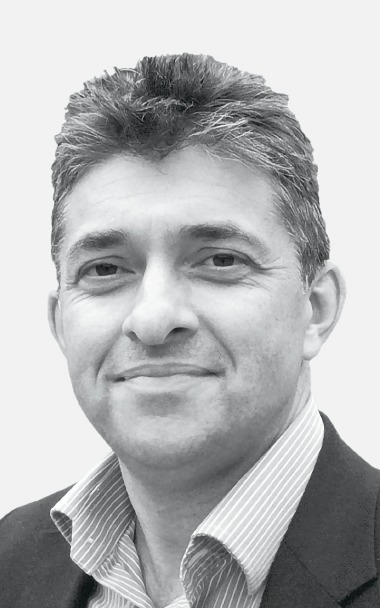 Tony Lopez trained at St Thomas’s Hospital in London graduating in 1988, and spent two years in postgraduate medicine in London specialist hospital posts. After gaining MRCP in 1991, he joined radiology training rotations at Hammersmith Hospital and then St George’s Hospital qualifying with FRCR in 1994. He spent three months training in advanced endoscopic intervention at the Karolinska institute in Stockholm prior to appointment as a consultant interventional radiologist in Guildford in 1996.