Musculoskeletal (MSK) conditions such as osteoarthritis, tendinopathy, and enthesopathy affect 1 in 4 adults, resulting in pain, loss of function and reduced quality of life. The secondary co-morbidities associated with these conditions include diabetes, obesity, and depression.  With 1/3rd of all work absences attributable to MSK conditions, the direct and indirect costs are huge, estimated to be 5.76% of the national gross domestic product (GDP) in the USA(1). Therapy for these conditions traditionally starts conservatively in the form of analgesia, physiotherapy, weight-loss programmes, steroid injections, and orthotics. For patients with severe disease, and or who are resistant to conservative treatments, surgery may be an option. Unfortunately, many patients fail conservative therapies, and are not suitable surgical candidates.  Over the last decade, MSK embolotherapy has emerged as a safe, and potentially efficacious treatment option for these patients.

The scientific rationale for MSK embolotherapy comes from in-vivo studies elucidating the role of neo-angiogenesis in creating a nociceptive response(2). In osteoarthritis, VEGF expression is found to be increased in chondrocytes(3). Vascular growth disrupts the osteochondral junction, with inflammation propagating synovial angiogenesis through macrophage activation. Angiogenesis is therefore hypothesised to cause the structural damage and pain in OA, and can be exploited as an embolisation target(2). The first published description of MSK embolotherapy in humans was in 2013 by Okuno et al(4). Seven patients were embolised using imipenem/cilastatin sodium (an antibiotic with temporary embolic properties) to successfully treat patellar tendinopathy, rotator cuff tendinopathy, plantar fasciitis, lateral epicondylitis, iliotibial band syndrome, and Achilles insertion tendinopathy. Since this initial paper, there has been a steady increase in studies investigating the role of embolotherapy in a raft of MSK conditions.

The largest evidence-base for MSK embolotherapy is currently for the treatment of knee osteoarthritis. All studies to date have revealed consistent findings; genicular artery embolisation (GAE) is a safe and technically achievable technique resulting in a reduction in pain at early follow-up(5–12). As with any intervention designed to treat pain, the placebo effect must be considered; the recent randomised sham-controlled trial from Bagla et al addressed the placebo effect for the first time, showing GAE to be superior to a sham procedure in a small cohort of patients(5). More work is required to confirm generalisability of the data, and establish optimum technique and patient selection. The National Institute for health and Care Excellence (NICE) recently published recommendations on GAE preferring future research to be randomised controlled trials against sham or current best practice; highlighting the need to report details of patient selection and identify those who would most benefit from the procedure(13). Current data suggests the ideal patient for GAE is someone with mild to moderate OA, resistant to conservative treatments, with lack of severe meniscal injury, or bone marrow oedema on pre-procedural MRI(14).

A sound knowledge of anatomy, embolisation end-point and equipment is required in order to perform safe and effective MSK embolotherapy (figure 1). As with all embolisation procedures, the smaller the particle size, the greater the risk of non-target embolisation. Bagla et el reporting two cases of temporary plantar paraesthesia following GAE, thought to be due to inadvertent embolisation of a branch of the tibial nerve using 75micron permanent particles(6). There are many important anastomoses between the arteries navigated during MSK embolotherapy, that can aid embolisation coverage, but also increase risk of non-target embolisation(15). Embolic choice is an important consideration, with enthesopathy mostly treated with imipenem/cilastatin sodium due to its transient effect, and risk of end organ damage. The number of diseases being treated with the technique is expanding rapidly, with recent success in treating refractory trapeziometacarpal osteoarthritis(16), and a small retrospective case series describing the use of imipenem/cilastatin sodium in patients with chronic lower back pain resistant to conservative treatments(17). Adhesive capsulitis (AC) is another disease with a growing evidence-base. Utilising radial artery access, embolisation of the hyperaemia seen in AC can be performed as a day-case procedure, making it an appealing treatment option. In one recent study, complete recovery was achieved in 37/40 (92.5%) patients following embolisation for AC(18).

MSK embolotherapy is the next frontier in interventional radiology, with the potential to help millions of patients. We must concentrate on producing high-quality research evidence to confirm the findings of early data, refine technique, and optimise patient selection. 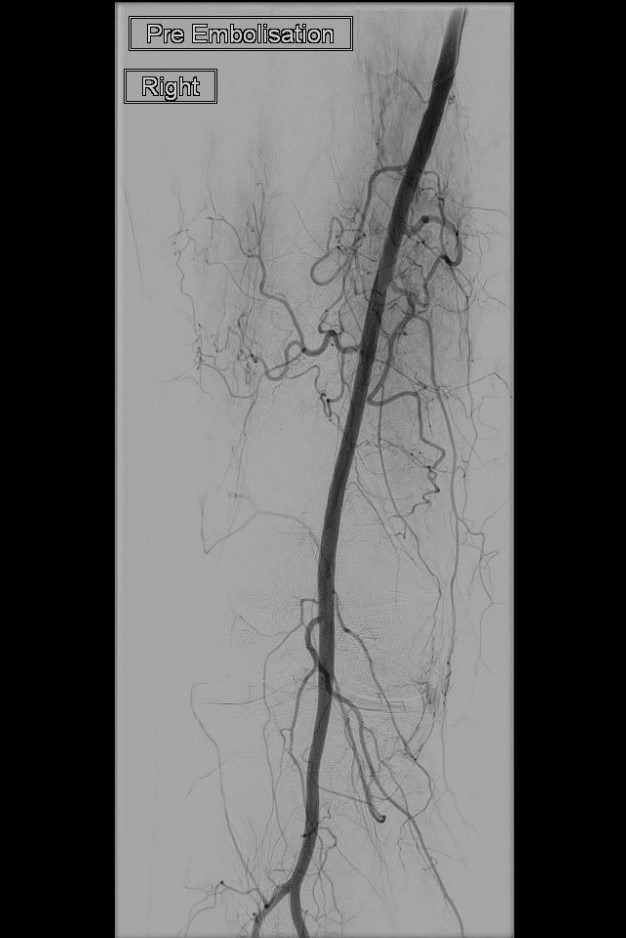 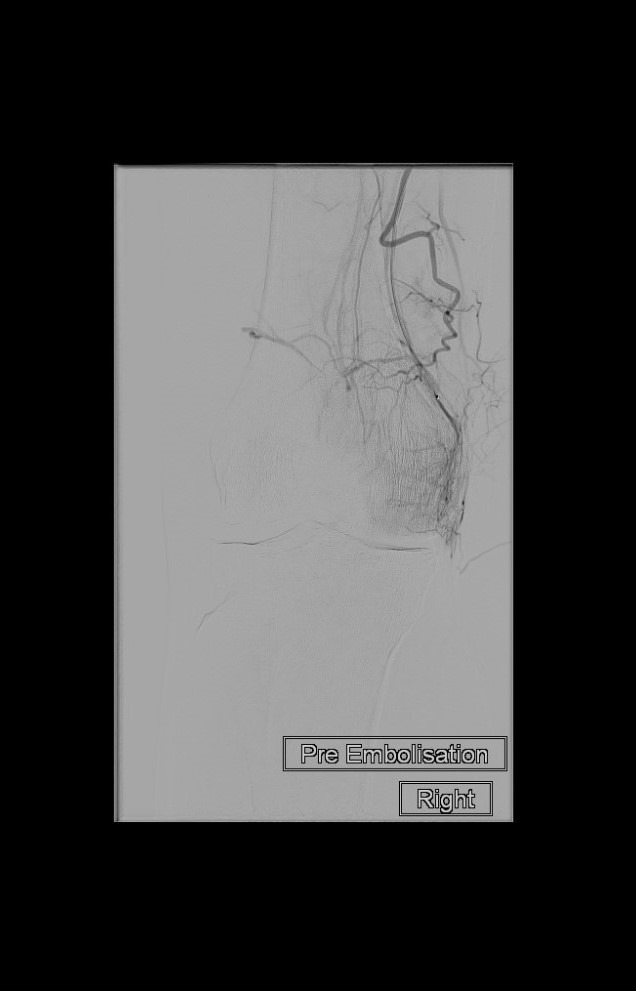 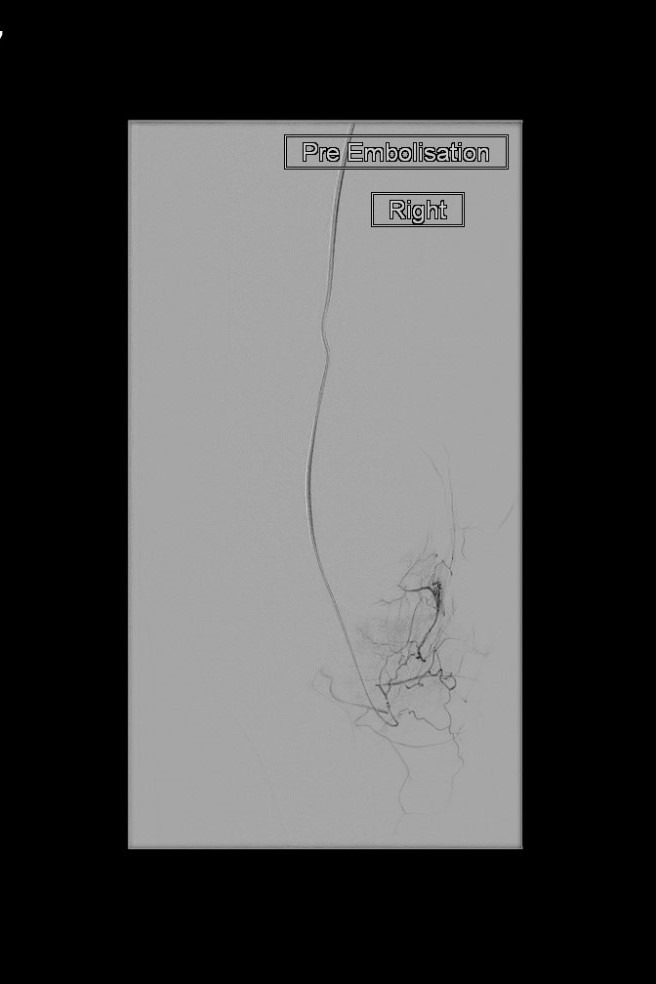 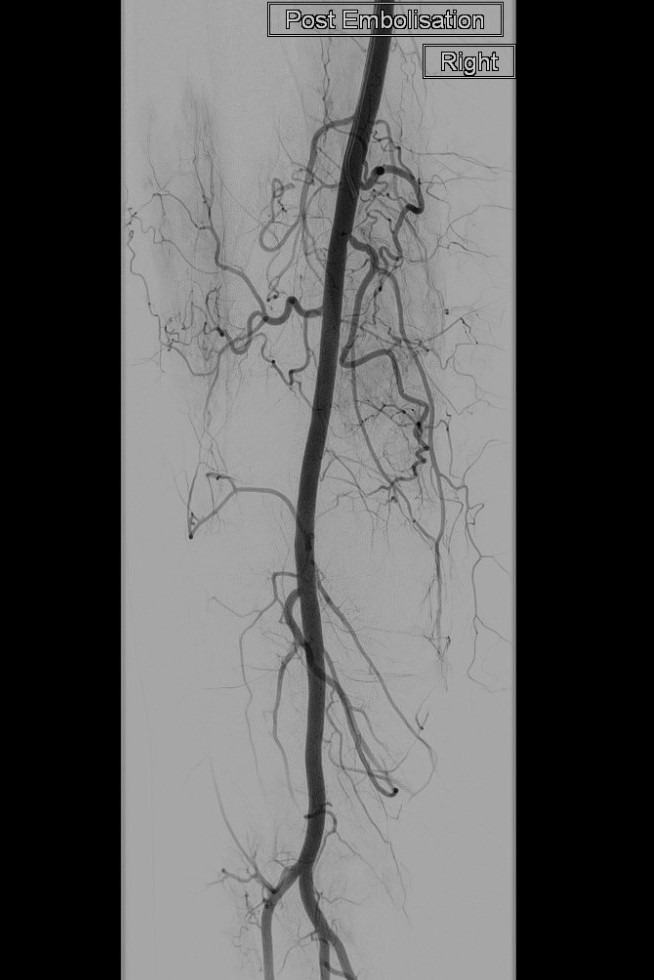 52-year-old female with right knee medial compartment osteoarthritis (Kellegren Lawrence grade 3). A: Diagnostic angiogram from the distal SFA revealing an area of hyperaemia within the medial tibiofemoral compartment synovium (solid arrow). A microcatheter was navigated into the medial articular branch of the descending genicular artery (B), and the Inferior medial genicular artery (C). The hyperaemic process embolised using 100-300micron Embosphere particles with good angiographic result (D). The patient had a significant clinical improvement at 12-month follow up. 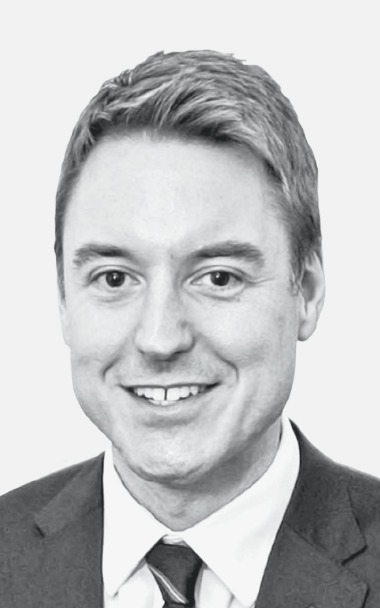 Prof Little is currently leading the first European study investigating Genicular Artery Embolisation (GAE) in the treatment of knee OA (GENESIS). He is UK CI for PROstate, an international study investigating long term outcomes of PAE. In 2021, his group opened a trial investigating the neuro-psychological factors correlating with failure to adhere to a day-case UAE pathway. He is current specialist advisor on the NICE interventional procedures programme, and is a member of the CVIR editorial board