We spoke to Prof. Vincent Vidal to learn more about his upcoming presentation at ET 2022.

Catch his lecture during the haemorrhoids special topic session on Saturday, June 25 at 08:30 CEST in the main auditorium!

The emborrhoid technique has emerged as a new treatment option for patients with chronic hem­orrhoidal disease. Although pathophysiology remains contentious, inter­nal hemorrhoidal pathology is thought to be the result of chronic hypertrophy of these vascular structures.

The emborrhoid technique was developed 8 years ago as a minimally invasive radiologic alternative to elective trans-anal Doppler-guided haemorrhoid artery ligation (DG-HAL)1. It consists of endovascular occlusion of the haemorrhoid branches of the rectal arteries.2

The emborrhoid technique does not need peri-­procedural medication and is carried out as an outpatient intervention. The femoral artery is punctured using the Seldinger technique under local anaesthesia. A radial approach is also completely fea­sible. A 4-F catheter is placed at the origin of the IMA for selective angiography. Haemorrhoid arteries are eas­ily identified, appearing tortuous and vertical at the level of the pubic bone. A microcatheter is advanced as far as possible into the SRA branches up to the CCR. Varying embolic agents can be used. Based on clinical practice, metallic fibered coils are usually used and allow an effective occlusion of the target vessels with no risk of bowel ischaemia related to a distal but nonterminal embolisation. Internal iliac arteries (IIA) can be involved in haemorrhoid vascularisation in almost a quarter of the cases. The middle rectal arteries (MRA) can be embolised in the same manner, in the same session. (Figure 1) Technical success rates in the literature have been very high, ranging from 93% to 100%. 3-8

To date, the results from almost 250 patients embo­lised using the emborrhoid technique have been pub­lished in several studies.9-11 The reported clinical success of the emborrhoid technique is between 63% and 94%, with no major complications.3-8 Recurrence of bleeding is the main reason for clinical failure, which can be treated by redo procedures as needed. Treatment failure may be due to the presence of significant MRAs4. The highest rate of efficacy has been reported with microspheres associated with microcoils.7 This embolic agent can provide a more distal occlusion of the target vessels. Recently, a study of the use of microspheres has confirmed these results, with a clinical success rate of 93%.12 Not surpris­ingly, the rate of minor complications was high, close to 50%, and consisted of small ischemic ulcerations of the anorectal junction, probably related to non-target embolisation. Large size spheres (>700µ) with a selective and non-wedged infusion are probably safe, according to literature, and could probably reduce the recurrence rate 9-11. Embolisation with liquid agents is discouraged. A recent animal model study demonstrated a rate of rectal necrosis in 100% of cases after distal embolisation with liquid agent 13.

Current data support the feasibility, efficacy, and safety of SRA embolisation for haemorrhoids. However, since the first publication about the emborrhoid technique eight years ago, several outstanding questions remain. First, better patient selection is necessary. Patient pop­ulations in both previous studies and real-life practice have been heterogeneous. Bleeding scores can aid in bet­ter patient selection, reducing the subjective part of the evaluation of symptom severity. A new validated bleed­ing score has been published recently.14 Such a score will likely provide a more accurate and reproducible method of assessment before and after treatment and thus will improve embolisation results. Finally, randomised controlled trials with longer follow-up are mandatory to determine the optimal role of this emerging and mini­mally invasive technique. 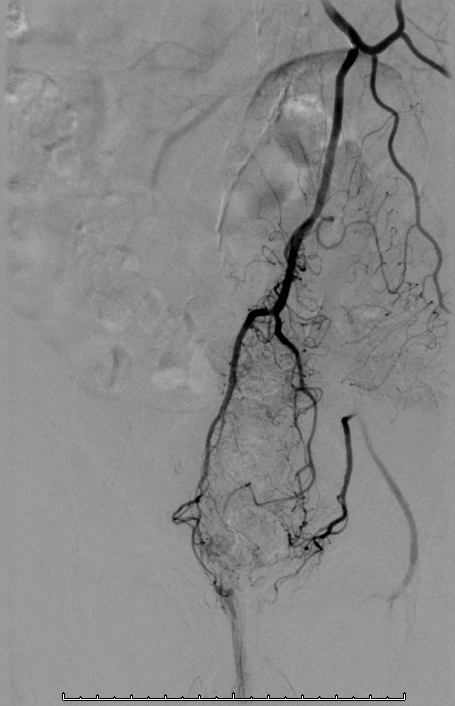 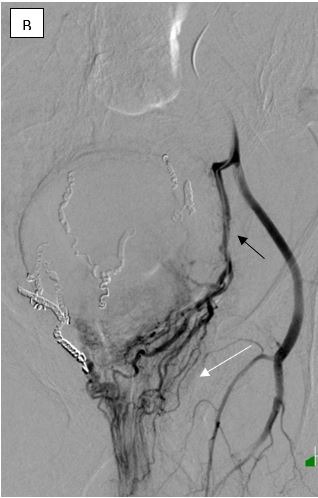 Figure 1. Frontal angiograms of the SRA (A) end the left MRA (B) showing a variant anatomy with a prominent left MRA arising from the internal pudendal artery (black arrow). After the embolisation of SRA, catheterisation of the MRA shows a complete revascularisation of the corpus cavernosum recti (B, white arrow). This artery was embolised with micro-coils. 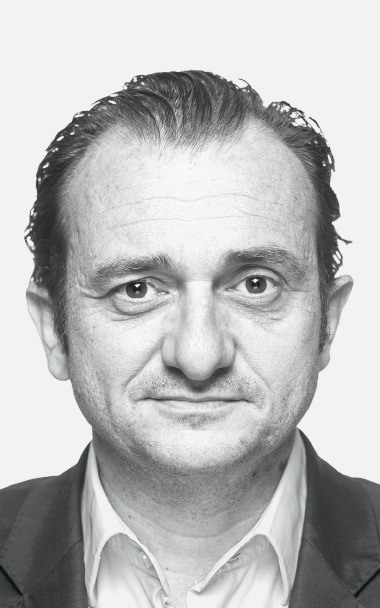 Prof. Vidal is an active member of multiple interventional radiology societies (SIR, CIRSE, ESR, APSCVIR) and his clinical work and research focuses on embolisation. He is the chairperson of the ET 2022 local host committee. 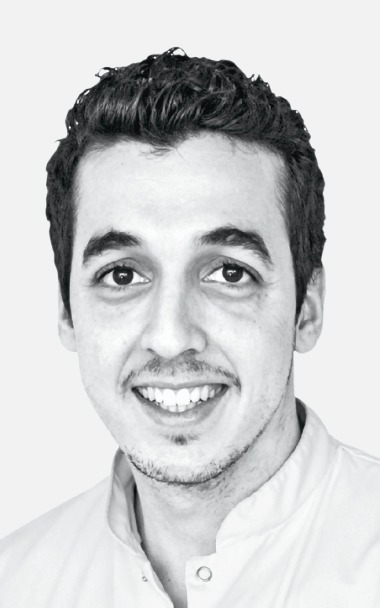 Dr. Tradi complteted his undergrad medical education  Aix-Marseille University in Marseille, France. After an IR fellowship at Montreal University, he came back to Marseille to complete his doctorate focusing on interventional radiology.
He is currently the Chairman of the French Junior IR Committee, named JuRI, a young association created in order to promote education on IR.